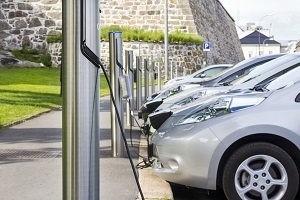 The New Jersey legislature is getting serious about electric vehicles. On November 6, 2019, it passed S-606 (formerly A-1371) encouraging municipalities to begin planning for expanded electric vehicle ("EV") infrastructure across the state. The bill dovetails with S-2252, currently stalled in the Senate Environment and Energy Committee, which would set tangible targets for transportation electrification. Both pieces of legislation will give municipalities a crucial role in advancing transportation electrification in the state.

S-2252 takes this a step further by setting concrete targets for transportation electrification in both the public and private sectors. The bill proposes installation of 600 charging stations at 300 locations in the state by the end of 2021. It would require that these stations be constructed along major travel corridors and at community locations. The bill also sets EV station requirements for multi-family dwellings, overnight lodging locations, and places of employment, with a mandate that by 2030, 50% of each type of establishment in the state shall be equipped with charging stations. S-2252 would also require that 100% of the state's light-duty vehicles be plug-in electric by 2035, with even more aggressive standards set for new bus purchases throughout the state. To further incentivize transportation electrification, the bill also proposes a rebate of up to $5,000 per electric vehicle purchased in the state for 10 years, or until $300 million in rebates have been paid out, whichever comes first. The bill is still stalled in the legislature, but its passage could mean major changes for the State's transportation framework and bring the importance of municipal planning for EV infrastructure to the forefront.

New Jersey is making a concerted effort to commit to transportation electrification, and municipal participation will play a critical role. If you are a municipality looking to address EV charging stations in your municipal and redevelopment plans, Parker McCay's Municipal and Environmental attorneys are available to help.